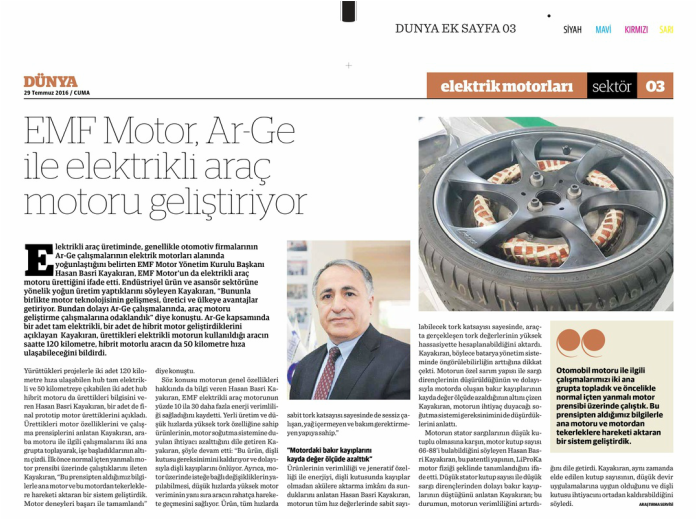 Hasan Basri Kayakıran, the Chairman of Board of Directors of EMF Motor, emphasized that the R&D efforts of the automotive companies generally focus on electrical motors in electrical vehicle production, and stated that EMF Motor also produces electrical vehicle motors.  Kayakıran mentioned that EMF Motor intensely produces for industrial product and lift sector, and continued "Besides, the advancement of the motor technology provides advantages for the producer and the country. Therefore, we focused our R&D efforts on developing vehicle motors". Kayakıran noted that they developed one fully electrical and one hybrid motor in the scope of their R&D efforts, and stated that the vehicle using the developed electrical motor can reach a speed of 120 km/h, and the vehicle using the developed hybrid motor can reach a speed of 50 km/h.

Hasan Basri Kayakıran gave information also about the general specifications of the said motor, and noted that EMF electrical vehicle motor provides 10 to 30 percent more energy efficiency. Kayakıran expressed that their locally manufactured products, which provide high torque at low speeds, reduce the need for motor cooling system, and continued: "This product eliminates the need for gearbox, and therefore prevents gear losses. In addition, the possibility of making optional modifications on the motor allows for high motor efficiency at low speeds, as well as easy starting off of the vehicle. The product also has a silent, oil-free and maintenance-free structure thanks to the constant torque coefficient at all speeds."

"We significantly reduced the copper losses in the motor"

Hasan Basri Kayakıran also explained that they also offer the possibility of transmitting the energy to the batteries without gearbox losses with the efficiency and regenerative features of their products; and stated that the torque values in the vehicle can be calculated with high precision thanks to the virtually constant torque coefficient of the motor at all speed values. Kayakıran highlighted that the predictability in battery management system is thus enhanced. Kayakıran underlined that the winding resistances were lowered with the special winding structure of the motor and thus the copper losses in the motor were significantly reduced, and explained that they also reduced the need for the cooling system required by the motor.

We divided our efforts for vehicle motors into two main groups, and we first worked on regular internal combustion engine principle. With the information we learned from this principle, we developed the main motor and a system that transmits the motion from the motor to the wheels.